14,950 potatoes to buy everything in the armory.

Click the tabs below to navigate. You can visit (and edit) the actual page by clicking the links to the right of the tabs.

It is possible to try out different styles for your character out-of-game by using unofficial dressing rooms:

[edit tab] [view tab]
Big thank you to everyone on the official forum for their help with stats and statistic calculations. You can also find charts and weapon reviews on forum threads as well.
Show Weapon Poll
Hide Weapon Poll

Weapons come in two types: "Weapon 1"s (or "Primary Weapons") and "Weapon 2"s (or "Secondary Weapons"). Every gun does a certain amount of fixed damage, unless the target is crouching (which reduces the damage inflicted by 40%), or is is under the effect of certain perks. You can learn more about how damage is applied on to a player on Health, including how damage is applied a decimals. All weapons have a shooting distance of 500px, although certain guns fire from further away from the body than others, resulting in a slightly longer shooting distance from a player. It would currently cost

2650 potatoes to buy all weapons in the armory.

While some guns are favored more than others, every gun has potential if you use it in the way it's designed for. The gun someone chooses should match their play style, or their play style should match their gun. Fighting the same way when using a Famas (fast speed, low damage) as well as a M40 A5 (low speed, high damage) would result in one or both not being used to their best advantage,

If you need to update a weapon's stats, you must update it on the weapon's page; it will then automatically update it here (you may need to purge the page to see results).

Primary weapons (unlike secondary weapons) require you to use

clips when you reload. You can only have 4 clips at a time, not including the one you're currently using. Note that both the damage listed here is the weapon's base damage, not affected by perks. The primary weapon is the one a player starts off with when spawned/respawned.

Despite rumors to the contrary, using the M40 A5 (Sniper) as an automatic (versus manually firing each shot via a click) does not decrease it's firing rate. Using it as an automatic may not be the most efficient use of ammo, but firing rate is not lowered. This is true of all automatic weapons' fire rates.

Unlike primary weapons, secondary weapons do not have a limit on the number of times they can be reloaded. However, this is balanced out by their all-around weaker stats. Note that both the damage listed here are the weapon's base damage, not affected by perks. No secondary weapons have a scope.

The tables above list the essential data for each weapon. The tables below use that data to construct meaningful statistics to better understand when a gun may be useful. However, do note that these don't account for real scenarios, such as obstacles, missing, sniping tactics (shooting from a safe location), or cases such as trying to kill a VIP and only getting limited shots off before a quick death.

The DPS (Damage Per Second) is around how much damage you would do to an opponent in a second if you shot non-stop (at the fastest speed for non-automatic) with every shot hitting. Higher numbers are better, but keep in mind this doesn't account for accuracy, or how fast you may actually be shooting (in case of non-automatics).

The DPC (Damage Per Clip) is how much damage a firing a weapon's complete clip would be (assuming every shot hit).

The DWDPS (Distance Weighted Damage Per Second) incorporates the hit chance (supplied on table below) into the DPS (Hit Chance * DPS). This helps to depict the DPS when firing from a long distance, instead of up close.

The Time to Deal 40 Dmg is how long it would take to kill someone if every shot hit (assuming a full clip). This is calculated with the formula: (ceiling(40 / damage) - 1) * (1 / fire rate) [+ (reload - (1 / fire rate)) * number of reloads, if clip doesn't hold enough ammo to kill]. You can also replace "40" with the HP of your choice to find different times. (R) denotes a weapon requiring a reload to do 40 damage (with the reload time included).

Sorting by two columns: If you want to sort by weapon type and another column, first sort by type, hold down shift, then sort by another column. 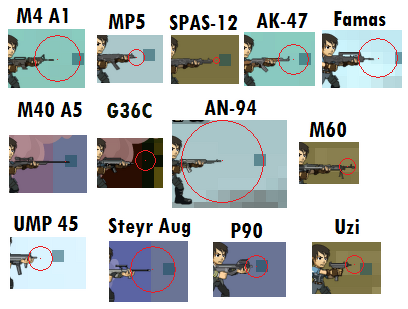 Accuracy Fields are a way to visually represent the accuracy of a weapon (at least to some degree). Accuracy fields take advantage of two facts:

The larger the accuracy field, the more accurate the weapon. (Note that the M40 A5 is not represented as simply a dot, but a circle of infinite radius)

The radius of the accuracy field is the Precision Radius.

All bullets shoot a distance of 500px from the point at which a specific gun fires, right around the tip (the "outer range"). However, not all guns are the same length, causing some guns to actually shoot a little further from a player than others (the "inner range"). The inner range is also what allows you to shoot through blocks you are next to, due to the distance between the tip of the gun and the player's hitbox.

The inner range can be measured by draw a conj wall on a flat surface, walking up to it, and then measuring the distance from the inside of the first wall (the edge of the player's hitbox) to the point where the "harmless bullets" glitch occurs (the exact point where the bullet spawns). Depending on how many blocks away the bullets would spawn, the guns with the same block distances seem to have the same inner ranges.

When using a weapon with a scope and viewing as much extra distance as you can (~8 blocks), you end up viewing most of the outer range of a bullet (800px screen width / 2 + ~8 blocks (8*12px = 96px) ~= 500px). As such, in this scenario most of the firing distance that goes off-screen when using a scope weapon is attributed to the inner scope.

Show/Hide Extended Table
[edit tab] [view tab]
Perks comes in many varieties, each intended to help a different aspect of gameplay. Buying a perk 1 / perk 2 unlocks the perk for the other as well. Equipping a perk will cause you to have to wait for the perk's cooldown time before you can use it. C4 and mines are impervious to gunfire. Perks are activated after equipping in the armory (after purchase) by clicking the icon on the bottom right, or pressing 3 / 4. It would currently cost

700 potatoes to buy all perks in the armory.

Skins are away to customize the appearance of you character. While each skin must be bought separately (even for different genders), you start off with the default male and female skin, so you can switch between genders in the armory (even as a guest). It would currently cost

9500 potatoes to buy all skins in the armory.

Skins offer no in-game benefit, and are purely aesthetic, and possibly to show off your skills. You will also emit slightly different sound effects based on your skin's gender when you are damaged. Note that the listed names are not official in any way. Click an image to see it larger.

There are also zombie skins, but these are not purchasable[Confirm], and are instead for the upcoming zombie game mode.

Hair styles were added to the game on the 20th May 2014. They offer no in-game benefit, like skins. If you use the "default hair" hairstyle, you will be shown with the hair that comes with your current skin. Note that the listed names are not official in any way. Click an image to see it larger. It would currently cost

2100 potatoes to buy all hair styles in the armory.

Retrieved from "https://fortoresse.fandom.com/wiki/Armory?oldid=7217"
Community content is available under CC-BY-SA unless otherwise noted.